"Christmas in Two Acts" was one of the best theater productions in recent years. 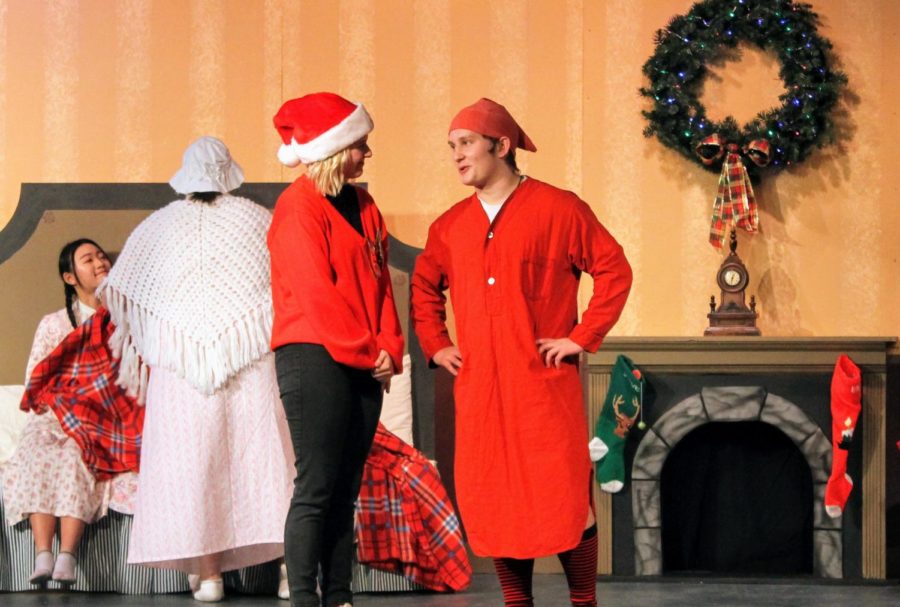 Last weekend, from November 30th-December 2, Lumen Christi students performed the play “Christmas in two acts.” This play had two different acts with a different cast of characters.  The first act was a live performance of the story The Night Before Christmas. This scene featured the host, Katie Krell, who read the story. There were three children in bed, as well as three mice throughout the house. The narrator was frustrated as “clatter” kept interrupting her story telling. However, she was eventually able to finish and tell the story of The Night before Christmas.

The second act of this play had to do with a church putting on a Christmas pageant. One church heard that a different church’s Christmas pageant would be extra special that year, as it would feature a camel. A group of moms and a young girl decided to start a committee to come up with a unique pageant that would be unforgettable and blow the other church’s pageant out of the water. They wanted to base their pageant off “The 12 days of Christmas”- featuring real birds!! They got a group of kids to start practicing this special pageant. However, the children decide to do their own thing and have a traditional pageant. With the help of the reverend’s daughter, played by Nina King, they were able to create a pageant that showed the true spirit of Christmas. This was a very cute play. It was very relevant that the Lumen Christi students worked extremely hard to put this production on.

According to Mrs. Lienhart, people were pleasantly surprised as this years “Christmas in two acts” was one of their best performances yet. Students and actors Chloe Kirchmeier and Michaela Powell said they really enjoyed the play. When asked what their favorite part was about the performances they answered, “It’s just nice to have a crowd. We are able to get their participation and hear their laughs. One of the most noticeable laughs is Mrs. Furmeau. You can her joy above the crowd and it is so genuine.” They said that many people came because it was for families. It had many aspects that children would enjoy but also many funny jokes that would bring in adults and students of the high school. What would you say to people who are considering coming to the play next year or this years spring musical that was announced at the cast party, “Oklahoma”? They say that you would have an opportunity to make so many friends. Theatre people are the best. “It really is the best part of Lumen Christi,” said Chloe.

The play was a fun, light hearted and entertaining performance that left the crowd in Christmas cheer and eager for more. If you attended the play, let us know your thoughts in the comments! And if you missed it… we’re so sorry! You’ll have to make a point to attend the musical or the play next year because this theatre group is truly spectacular.