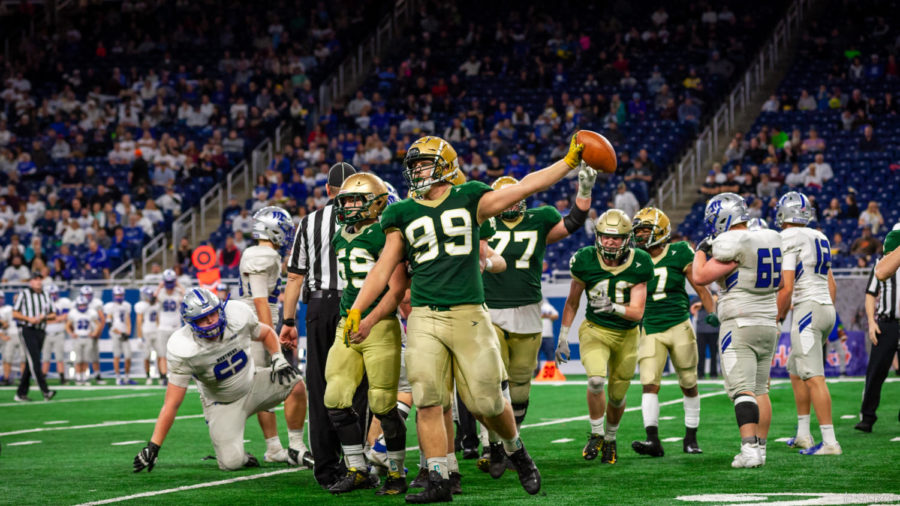 Participating in sports at Lumen Christi is about adding to the tradition. This senior class has certainly exemplified what it means to add to the tradition. Winning the third state championship in a row was the goal at the beginning of the year, and they had determined to do whatever it took to win.

For the seniors, the week of the state championship game was a week of memories. At the end of each practice, all the seniors stood up one at a time and said something meaningful. Everyone said something different, but one common theme that was repeated over and over was brotherhood. It was a family that would last forever.

Only a select few seniors will put the pads on again after high school, but for most it was the last time ever playing competitive football, let alone wear the green and gold. All the hard work, starting with being at school by 7 a.m. in summer, had paid off. This was the first time in school history that three state titles were won in a row.

What does it take to be a three-time state champion? To be a three-time state champion,  the team has to prepare, and the week before the championship at Ford Field, many things happen.  On Sunday, the players go over what they need to improve on from last game, and they watch the opponents’ film. Then, the scout team and the first team walk through their responsibilities for the game and game plans for both offense and defense.  Starters do some light conditioning. Monday is the most intense practice – it sets the tone for the week, and players have to know the other team’s plays. On Monday, the team practiced at University of Michigan’s inside facility in preparation to play inside at Ford Field.  The reason that the team practices inside is to adapt to the hot dry air inside and get out of the cold snowy weather. The players say practicing at the colleges are some the best memories. Tuesday is the practice at Lumen. Wednesday is practice at MSU. Finally, on Thursday, Thanksgiving Day,  the players walk through their offense and defense and come back later in the day to have spaghetti dinner together. Friday is game day. In the morning, the team has meetings then attends mass. Before getting on the road, family and friends send off the players and a police escort leads the team to the highway on their way to Ford Field. The team gets there about three hours before their game. Now it’s time to win a State Championship

The Titans had come into the 2018 season with a big target on their backs. Grand Rapids West Catholic was their first opponent of the season, who had just won their 5th state championship in a row in the 2017 season. The Lumen-West Catholic rivalry had been going on for many years with close games and tough competition between the teams. Both schools were expecting a tough game like last year when Lumen won 27-24, and the year before when West Catholic won 30-13, but Lumen was up for the challenge. The Titans started off strong with two turnovers in just the first quarter and gained a four touchdown lead in the first half. West Catholic tried to come back but just could not, and the Titans went on to victory,  34-12. This was just the start of all the amazing performances we would see from the Titans in the 2018 season. The Titans dominated their opponents over the next weeks. They had a 34-7 win over Western, 33-3 win over Coldwater, 51-13 win over Northwest, 21-0 win over Marshall, 41-26 win over Hastings, 41-0 win over Harper Creek, and a 27-7 win over Pennfield. The boys continued to work hard and gave every game their best. Before the Titans knew it, they were heading into the playoff games. Their first game was against Napoleon, when the Titans won 52-30. Lumen Christi continued to be victorious as they beat Michigan Center 41-14, won against Blissfield 33-0, and to Montrose 42-20. Before they knew it, Lumen would be playing in their third consecutive State Championship. The Titans were playing the Montague Wildcats at Ford Field on Friday, November 23rd.

The division 6 state championship game between the Lumen Christi Titans and the Montague Wildcats was set to be a showdown of epic proportions.  Lumen Christi took the field for the final game of their so-far undefeated season to face off against an 11-2 Montague who had battled their way to the finals.  The Wildcats were ready to dethrone the Titans and take their place as the victors of division 6.

The game began with the Wildcats kicking off to the Titans. The Wildcat defense lived up to its reputation and forced the Titans to punt. However, the Wildcats could not move the ball on the Titans and were also forced to punt.  Yet again, the Wildcats stopped the explosive Lumen Christi offense. Now with the ball in Montague’s possession, it was finally time to put some points on the board. Montague’s Bryce Stark broke free for a 57-yard touchdown run to put the Wildcats up 7-0. This was only the second time that Lumen Christi had been behind all year. The Titans replied with their own 57-yard touchdown run by Nick Thomas. Then the Titans came back with a 40-yard touchdown pass to Cy’Aire Johnson, giving them a 14-7 lead.  Montague, however, still had fight in them as they managed to tie up the score 14-14 heading into half time.

After the tight first half, an even closer second half was expected to follow as fans everywhere sat on the edge of their seats, but the Titans would have none of it.  The Titans came out in the second half with an explosive entrance, scoring four touchdowns with no reply from the Wildcats making the score 42-14. Lumen Christi had dominated the second half but the Wildcats would not give up so easily. In the final three minutes of the game the Wildcats scored, recovered a fumble, and scored again. The Wildcats managed to get the score to 42-28, but there was just not enough time for them to mount a comeback. The Titans had put the perfect end to their undefeated season and made school history with their first three-peat.