The team looks to rebuild after losing 7 players to graduation last year. 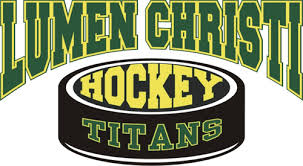 ​The Lumen Christi hockey team has had its tryouts, and the roster has been set. Practices have been underway for the last several weeks. They will not be the same as previous years, as the team will be practicing after school, ten hours later than previous years. There are twelve new players trying out this season, which is a lot considering only seven seniors graduated. Those seven seniors included the top 3 goal scorers. The full team probably will not practice for a while because football players are still continuing their undefeated season. After a .500 record last year, the titan hockey team hopes to do much better this season. Hopefully, things will start the way they left off last year because the second half of the season went phenomenally. The first game will be November 28, against Flint Powers, who beat us by two last season, but we had only practiced together for a couple of days at that point. After losing in the regional championship game two years straight, the Titans are hungry to advance further this year.