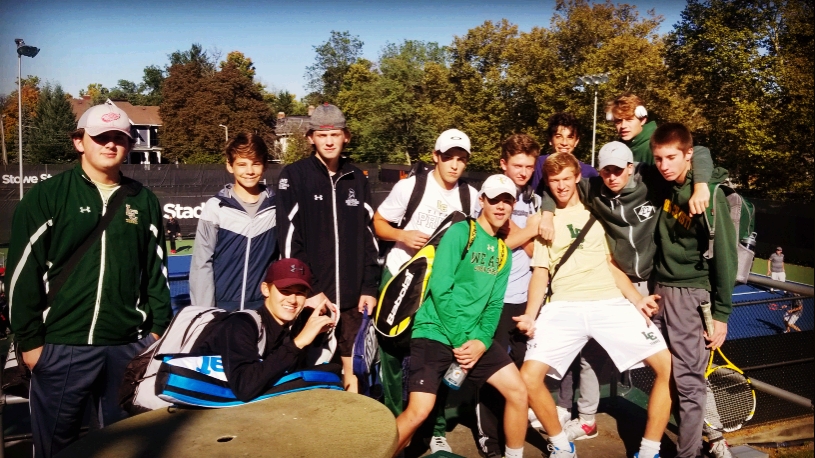 Lumen Christi varsity boys tennis came into its Regional Thursday at Ann Arbor- Greenhills seeking its first trip to states since 2015. The Titans had a very long streak of trips to states in its notoriously tough region which was unfortunately ended three years ago. Three years later Lumen is headed to the state tournament after gaining eleven points at its regional Thursday at Greenhills. All eight of Lumen’s flights won their first round matches gaining much needed points. The way Regionals work is there are eight teams in a bracket and for each flight ( 1 singles, 2 singles, 2 doubles etc.) you are seeded based on how you did throughout the year. All singles players had the three seed in their brackets except for four singles player Andrew Varner who came into Regionals 21-0 and secured the one seed. The doubles players also were seeded in their brackets with one and two doubles with four seeds and three and four doubles with two seeds. With eight points already on the board the Titans needed to find a way to get two points with eight tough second round matches against top teams in the state including AA Greenhills, Grosse Isle and AA Gabriel Richard. With a default from a player at four singles the Titans needed one more point to get to states now sitting at 9/10. Three doubles Cole Clifford and Patrick O’ Dowd came out in there match against Grosse Isle knowing they would be highly counted on to push LC over the edge. They came out firing winning their first set (6-2) but fell short in the second losing (5-7) with a third set tiebreak remaining. After talking with Coach Rochester three doubles went on to win (6-3) in the third set sending Lumen to states for its first time in three years. With one more semi-final match to go at three singles Alex Rand anticipated another battle with AA Gabriel Richard who he had played in two tough matches earlier in the year. Rand won the first set (6-3) then had four match points at (5-3) and (5-4) but ended up losing the second set at (5-7). A third set tiebreak was set and at (5-2) unfortunately Gabriel Richards three singles defaulted the match. Lumen now with eleven points had three finals match ups at three singles, four singles and three doubles. Unfortunately all three finals matches lost to.. Ann Arbor Greenhills who placed first with 24 points and Lumen tied for second with AA Gabriel Richard both with 11 points. States is set for next Friday and Saturday at Kalamazoo College and Western Michigan University.